Lower the Boom! Bring Back the Enfield Model G

Reading David Blasco's excellent Royal Enfield blog about the new Hitchcock's rigid Royal Enfield frame got me thinking. Something is missing from this modification. The bike looks exactly like a standard Bullet, only now it's removed all the comfort of a swingarm rear end.

I always preferred the lower, longer, sleeker stance of the 1940s generation of motorcycles. I guess that's why I'm drawn to bobbers.  The 1955-present Enfield has a funky frame that is supported in part by the engine itself which can make it trickier to add a standard hardtail frame mod like those made for Triumphs and Yamaha XS650s at suppliers like Lowbrow Customs. Hitchcock's realized this and spent a lot of time creating a high-quality rigid rear end... which doesn't seem to change the look of the bike at all.

I decided to look at Enfields, old vs new. You may know that the Royal Enfield Bullet was a design almost completely unchanged from 1955-2008 when the company finally redesigned the engine. Below you'll see a comparison between the 1940s and the 1950s (modern) eras of Enfield motorcycles. The 40s was a little longer and much lower. The 50s were more compact and a lot higher in the center.

I love my Enfield. If I were going to drop some cash on a proper hardtail frame mod, which I would in a second, I would want it to have about a 3-4 inch drop, bringing the center of the bike, the gas tank, engine, and seat lower, closer to the feel of say a 1940 Enfield Model G. You would, of course also need to shorten and possibly rake the forks a bit as well. Or replace the entire front end with a girder fork.


Posted by HerMajestysThunder.com at 6:00 AM 2 comments:

Some really great, desktop-worthy, color photos from Germany, circa 1953. Several more at The Velobanjogent. 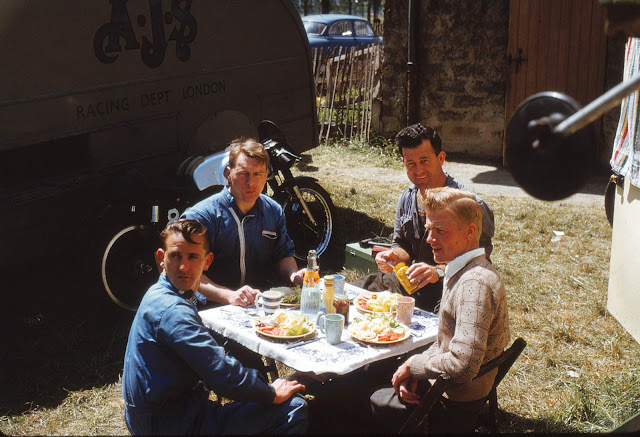 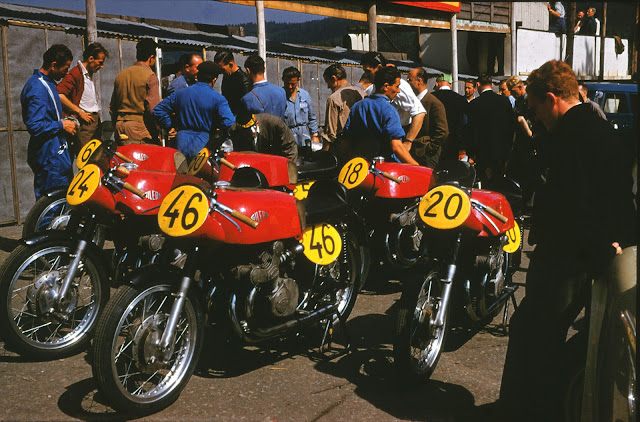 Posted by HerMajestysThunder.com at 9:32 PM No comments: